The Pride of Atlanta

Of the original seven streets that made up Atlanta in its early years, Marietta Street was the location of a mile-long stretch of the community’s finest homes. A major railroad hub and commercial center, the city was a valuable target for the Union Army during the Civil War, and Atlanta was burned to the ground during General William Sherman’s March to the Sea. Whether overlooked or intentionally spared, one of those fine homes was left standing — where Glenn Hotel now sits at the corner of Marietta Street and Ted Turner Drive (formerly Spring Street).

This property changed hands in 1888, when it was purchased by soon-to-be mayor John T. Glenn. An attorney and the son of another Atlanta mayor, Mayor Glenn achieved a lot during his 1889-1891 term. Electric streetlights were lit, a streetcar began running, and water lines were run to Oakland Cemetery. When he died in 1899, his estate included the land.

Already the center of Atlanta, several of the city’s tallest skyscrapers were built on Marietta Street in the first years of the 20th century. In 1923, the Spring Street viaduct was completed in order to relieve traffic and connect the central business district with areas further south. After the viaduct’s completion, a wave of new office development swept into downtown Atlanta. The ten-story Glenn Building was commissioned by the George Fuller Company to coincide with the opening of the new viaduct.

The building was designed by Waddy B. Wood, a well-known and prolific Washington, D.C., architect, who had few commissions outside of the Washington area. Some of Wood’s notable projects included the Chinese Embassy, the Woodrow Wilson House, and the Stock Exchange Building. He also remodeled the State, War, and Navy Building as an annex to the Navy Building.

Considered an excellent example of the Neoclassical Revival style, which reinterpreted classical motifs from earlier historical styles in the first decades of the 20th century, the Glenn Building is especially important because its ornate exterior remains unchanged and because it is among the few tall office buildings from the early 20th century that survive in downtown Atlanta.

The Glenn Building provided office space to local businesses, manufacturers’ representatives, and branch offices of national companies. In 1925, 38 different tenants occupied the building. After changing hands several times, the Glenn Building was saved from demolition by historical preservationists in 1986. That is also the year when the quest to have the building listed on the National Register of Historic Places began, although it wasn’t finalized for another 20 years.

Featuring a smooth, limestone facing and terra cotta detailing, the Glenn Building’s heavy cornice is its crowning glory. The cornice is constructed of brown limestone decorated with egg-and-dart, bead-and-reel, and dentil molding capped with neoclassical terra-cotta panels with lion heads. These 39 lions remain the guardians of the building today.

In 2003, Central Atlanta Progress placed the building on a top 10 “development opportunities” in downtown Atlanta, and in 2006, Legacy Property Group heeded the call. After a major redevelopment and renovation, the Glenn Building became Glenn Hotel, the first boutique hotel in downtown Atlanta. Now on the National Register of Historic Places, Glenn and the lions proudly watch over the progress of Atlanta from the corner of Marietta Street and Ted Turner Drive. 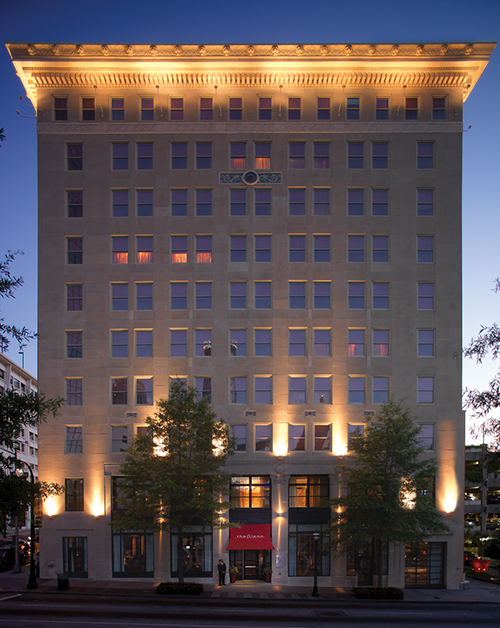